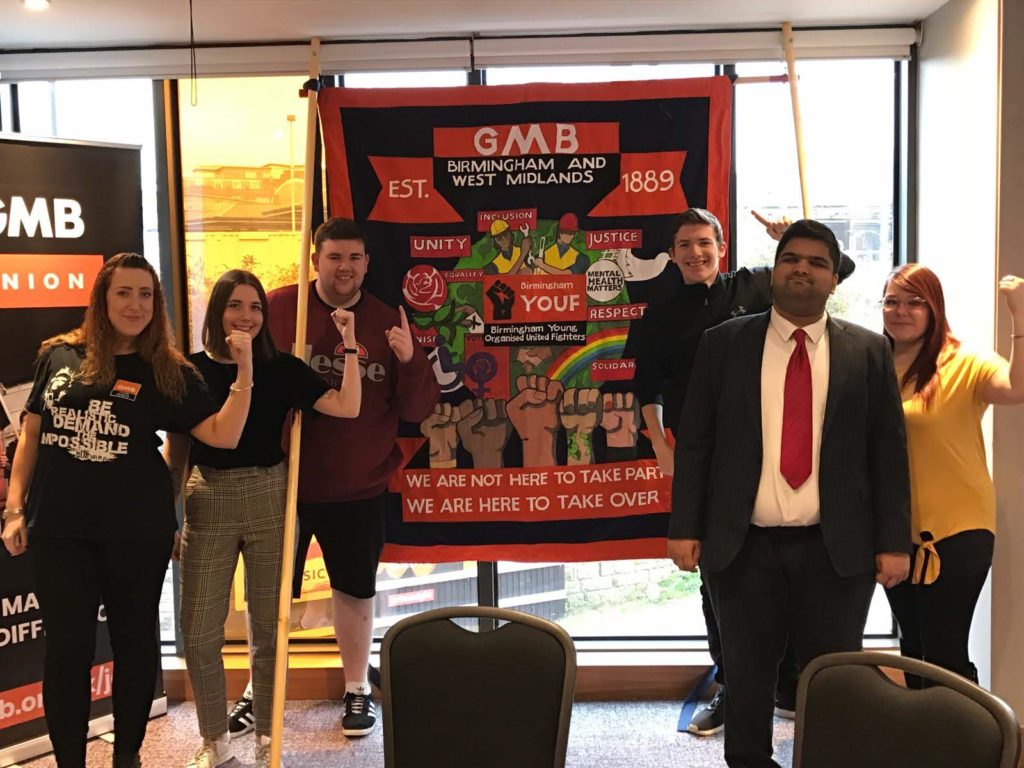 all got together for their yearly summit meeting in November 2018. All 9 regions from across the United Kingdom were in attendance,  including 5 members from our very own Birmingham and West Midlands region.

2018’s summit was attended by our very own Steph Lowe who represented our branch S64 brilliantly. She attended the weekend in Newcastle-upon-Tyne, and didn’t know anyone who was in attendance. She was very apprehensive and nervous to be attending not knowing anyone, but even more so because she was being driven there in a car with 5 people she had never met before. However, from the moment Stuart Perry and the Young Members from Birmingham soon started to make her feel comfortable in the journey to Newcastle.

During the course of the weekend there were workshops held such as Effective Use of Social Media, Improving the GMB for Young Members and improving work for Apprentices. There were motions put forward by different regions for causes and campaigns that should be the focus of the Network for the next 12 months as well as items to be taken to the TUC.

The summit is there to bring together Young Members from all 9 regions including Activists and Workplace Representatives (Stewards/Reps). Alongside Steph, there were 4 other delegates from our region, these included Molly, Sam and Paddy Benham as well as Ahmed Bostan, and they are all from the Birmingham part of the region. All of them made an effort to make Steph feel comfortable and included.

The weekend started at noon on Friday 16 November 2018 and lasted until mid-late afternoon on Sunday 18 November 2018. The Young Members Summit is a brilliant way to find out more about what each region has been working on and what they have done well with for the 12 months previous. The weekend also gave everyone chance to talk about what plans we have going forward.

Steph said, “The weekend was really great and even though I was nervous I was quickly made to feel welcome. I travelled there with 5 people I had never met before, and instantly they made me feel welcomed and part of the group. Molly, Sam, Paddy, Stewart and Ahmed were very understanding of the needs I have that others may have perceived as awkward. They all kept checking I was okay and comfortable and made me fell less anxious.”

She then continued to explain the processes of the weekend as mentioned above, including information about the other regions. “Everybody from the other regions was really friendly, and interested in the place I worked, where I came from and what my role within the Union was. Everyone from Activists, Officers and Reps encouraged me to give input in sessions, which included me putting my hand up and speaking to the whole room on a few occasions, this is something that I am always terrified of doing.”

Steph continues to say “The whole weekend was brilliant and I would happily do it again, it was a really good experience and I left the weekend with some really good friends. I have always been happy with my Union, but this weekend made me PROUD to be a part of the GMB family.”

A meeting for the Young Members of our Region will be held this year on a few different occasions, when these have been decided we will update the website, and we will continue to try to recruit new members as well as ensure our current members are happy For any and all enquires relating to this article or any other aspect of Branch S64 please do not hesitate to email us at branch@gmbstaffordstoke.org.uk